Globalisation has given us many gifts and along with it a basket of basic challenges. With a lot of people working and relocating across continents, language is one area that is always under the radar of parents while raising kids. Language challenges that we dealt with as adults when we moved out of our native countries are now faced by our children at a much younger age.

Raising bilingual children in a country different from your own poses many questions for a parent. What language should I speak with my child? What happens when we move back and he does not know the native language? How can I prepare her to feel comfortable in any country, or in any continent?
To help parents understand bilingualism better, we spoke to Aneta and Se Padilla from Holesovice, Prague who have 2 kids, speaking 3 languages! Se is from San Francisco, USA and has been living here in Prague for 17 years. He is co-owner of the Prague Beer Museum. Aneta is Czech and is in event production. 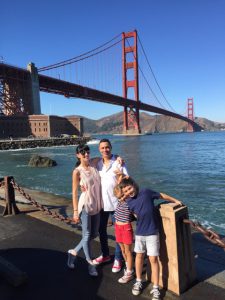 What language do you speak at home? “I speak English, while Aneta speaks Czech with the kids,” says Se. Their 2 children Cash (boy) and Lili (girl) go to the French Lycee and speak English, Czech and French.

Is there any special reason why you picked a French school? “We wanted our kids to learn one more language other than Czech and English ” explains Aneta. “Because once you are out of the Czech Republic you cannot use Czech. So its always good to have another language.” Se says that the French Lycee is a state school and its very good international education at an affordable price. “They learn a lot from the kids of different cultures. And the school has a bilingual program,” he explains. The advantage of a bilingual program according to Aneta is this that the children alternate between languages everyday. “So they are actually studying both languages equally.”

What challenges did you face with bilingualism when the kids were young? “It is always a bit hard in the beginning,” says Se. “You do feel that they are a bit slow with their speaking but believe me they are actually gathering the words in their heads. “I faced a lot of difficulty with their Homework especially French,” says Aneta. “Cash was really quick with language but Lili was a lot slower. But it was interesting because soon Lili took help from Cash!”

As parents, do you think that speaking more than one language confuses children?
“No,” says Aneta. “Kids switch easily between languages and sometimes don’t even realise that they are changing languages while speaking. But of course it varies from child to child.”

What do you feel about speech delays because of bilingualism? “Realistically, sometimes the kids can be slow in the beginning,” says Se. “But I don’t see this as a problem because they are gathering all this information in their head and processing it all the time.” He believes that its good to add one year for every language. “Because they do need that much time to absorb it before it all comes out as words,” he explains.

What advice can you give to other parents from their experience? Aneta believes that beginning too early with many languages can be confusing for some kids. “Of course it is good if they hear it around (like the kindergarten) but I don’t think you should start with 5 languages at once. Again it is very individual, but the kids need some time to process it as well. Adding the languages – I would say give them about 1 year space for each language. Then it’s easy on the kids and lays a good foundation to study or work in any part of the world.” Se believes that kids are really quick with language. “The earlier you start them with more languages, they faster they pick up and are comfortable with it,” he concludes.

Did you find this article helpful? Give us a like below.

Do you want to be featured as a family of the month? Write to us on info@littlepanda.cz

iThere are no comments

This site uses Akismet to reduce spam. Learn how your comment data is processed.

Begin typing your search above and press return to search. Press Esc to cancel.